An introduction to the Loma record label

Whilst Loma records might sound like a musically obscure label to some, it's very well known to others, particularly those with an interest in 'Northern Soul' and 60's soul in general, as well as Blues, R&B, 60's 'Garage' and psychedelic sounds. All in all, this eclectic label offers the music lover and collector an interesting mix of artists, songs and styles.

In 1964, Warner Bros brought in Bob Krasnow - an experienced promotions man who had been running the San Francisco office of King Records since 1958 - to head up its new subsidiary. Loma Records was Warner's attempt to cash in on the burgeoning teen market, its seemingly insatiable appetite for 45 rpm records, and the growing commercial crossover of 'Black' musical styles into the 'White' mainstream, something trailblazed so successfully by Motown.

Loma's releases met with mixed, but mainly poor results; the majority of Loma's output not even registering in the Billboard, Cash Box or Record World charts. Perhaps acknowledging this, and perhaps also perceiving greater shifts in musical tastes, the label tried to broaden its appeal half way through its short life by releasing 45's aimed more squarely at a young, white audience and catering for the growing demand for beat group, garage, folk-rock and psychedelic sounds. Notwithstanding this move into new musical territory, Loma continued to issue 'uptown' soul and R&B tracks. It would eventually return to this sphere under the guidance of legendary producer, writer and arranger, Jerry Ragovoy, whose time at the helm saw the label move from its native LA to the musical nerve centre of New York.

The attempts by Loma records to musically 'please all the people all the time' saw them release a handful of R&B and blues tunes (James Cotton, Smiley Lewis, Walter Foster, Lucky Carmicheal and others), one country and western single (Don Crawford), a couple of 45s from an Irish Beat group (The Belfast Gipsies), one release by music eccentric Kim Fowley, and a psychedelic prog/rock single (John Wonderling).

In the main though, history, primarily influenced by the nowadays mainstream music cult that is 'Northern Soul', remembers Loma records for it's uptown, uptempo, danceable soul music. For many, the roster of now revered acts such as The Apollas, Linda Jones, Larry Laster, Carl Hall, Ben Aiken, and The Soul Shakers epitomises the true essence of what Loma Records was about - or perhaps what it should have been about.

The first Loma release (Billy Storm) came out in August 1964, and the last (John Wonderling) four years later in September 1968. In that time Loma records released 106 singles (although one of those was likely never released) and a handful of albums.

Regardless of the mixed bag of musical genres, the influences of different producers - including Gene Page, Russ Regan and Jerry Ragovoy – and the fact that sometimes, particularly in the first half of Loma's life, those steering the label preferred to licence songs from other labels instead of focusing on developing 'home-grown' talent (and thus developing their own music stable and distinctive style) – Loma Records left us a musical legacy that is very much worthy of note.

Indeed, it is exactly this rather odd mix of styles and quality that appeals: from the first releases, cobbled together or licensed from other labels by general manager Bob Krasnow - operating with little in the way of budget from Warner Bros executives who nonetheless anticipated musical success - to the later soulful intensity much favoured by producer Jerry Ragovoy, every 45 says something about the life and times of Loma records, and it's a story worth listening to.

Explore the discography of Loma records by year or release number. 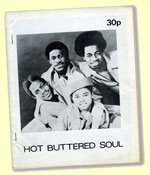 Read about the history of Loma Records in this two-part article that originally appeared in a 1977 edition of the soul music magazine Hot Buttered Soul.

Written and published by Chris Savory - respected music collector, record fair organiser and long-time presenter of the BBC Radio programme Record Collectors - to coincide with the UK release of the 7-LP anthology This is Loma, the article, which is republished for the first time in over 30 years, offers unique insights into the label itself and the many artists who appeared on its roster.

Loma Artists in the Spotlight: